This last week of June

Here's your final peek of my upcoming release!  THE HOMETOWN HERO will be released tomorrow, but here's an exclusive look at Chapter 5! ​

Big brother Owen O’Connell was only sixteen when his father mysteriously disappeared, forcing him to become a father figure to his five younger siblings. If you were to ask them, they’d say Owen is the perfect older brother with the perfect life: He’s single, a plumber, working his own hours in a close-knit community. Owen, though, knows that appearances are often deceiving. 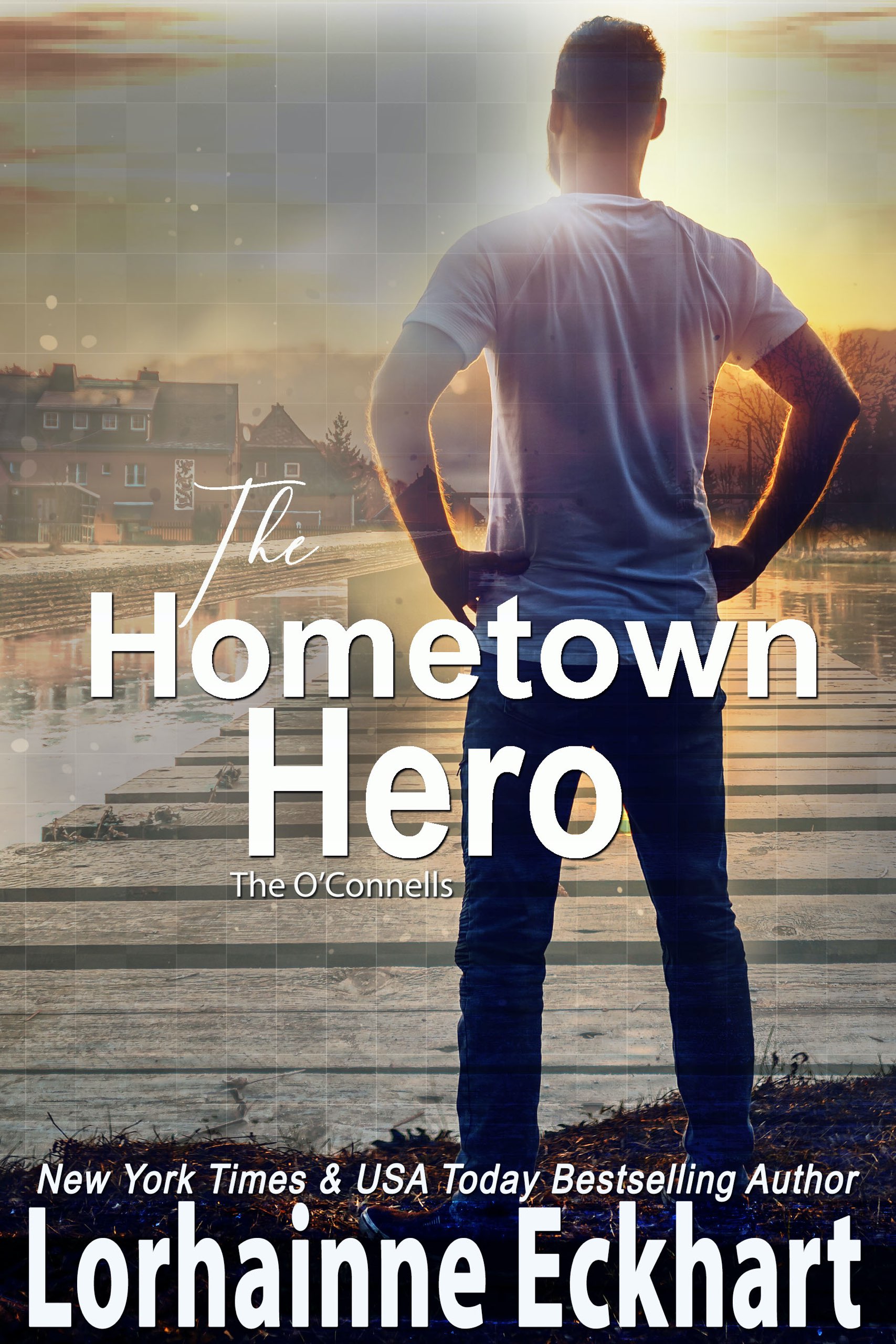 You can pre-order THE HOMETOWN HERO at these eRetailers:

His brother was waiting for him outside the school when he pulled up with Tessa. Her car was a compact stick shift, and after two drinks, it had been she who said they needed to go. He’d paid the bill, refused her money, and sat uncomfortably in the passenger side with his knees pressed to the dash.

“Pull in here and park,” he said, gesturing, seeing the way Marcus and Harold both gave him everything as they talked with each other.

“You have a hard time not giving orders, don’t you?” she said as she parked and pulled up the emergency brake.

“I’m a man, Tessa, and one who doesn’t know how to sit back and do nothing—or is that what you would prefer?” The way he said it, he knew she understood their conversation had gone way beyond casual. Maybe it was that the two drinks had eased away the guard that seemed to be a part of who he was, who she was.

She pressed her tongue to her lip but appeared unaffected, looking straight ahead, out the windshield. Neither of them moved. He knew his brother was waiting, staring at the two of them, but at the same time, he didn’t want to let Tessa off without an answer.

Her hand squeezed the knob of the gearshift, and he took in her ringless fingers. He’d never asked her about who she was seeing, and it wasn’t lost on him that she hadn’t, either. Every woman he met, the first thing she always asked was if he had a special someone. The answer was always no.

She gestured toward him. “Thanks for the drink, for the company, and for making this moment bearable.” Then she turned her head to him, giving him everything again. He knew he had his answer from her lack of response. Even her distinct blue eyes seemed to ease and soften a bit.

He jutted his chin to his brother and then gave everything to Tessa again. “Have dinner with me.”

Her eyes widened. He knew she hadn’t expected it. Hell, he couldn’t believe he’d asked. She shook her head. “That’s not a good idea…” she started, but he reached over and rested his hand over hers, feeling how she responded.

She shut her eyes for a second, pulled in a breath, and he could feel her tension. His hand was still over hers. She stared down at it but made no move to pull hers free. “Why do you want to have dinner with me, Owen?”

“Does it matter why? Do I have to have a reason? Don’t be difficult. Just go with it, Tessa. Don’t overthink it. It’s just dinner. I’ll talk with Marcus, and I’ll pick you up from your place.” He took in her surprise.

He’d have laughed at her expression, considering there wasn’t a woman he’d ever had to talk into dinner, into spending time with him, or into bed. “Unless you have plans,” he said.

That was her out, but he didn’t think she was one of those women. He could be wrong, but Tessa had never played those kinds of games. She just didn’t roll that way. “You mean other than a ton of homework to mark, lesson plans to ready for tomorrow, and watching Netflix? No, I have no other plans.”

He figured that was the only answer he was going to get. He settled his hand on the door and rested it there a second before pulling it open. “Great. I’ll finish up here and see you at yours.”

She nodded as he pulled his hand away and stepped out of her small car. “Owen…” she called out.

He leaned down, resting his hand on the door frame. For a second, he was positive she’d changed her mind. He said nothing but gave her everything.

“How do you know where I live?” she said.

“This is a small town, Tessa. You should know that if someone isn’t telling someone about someone else’s business, that person doesn’t live here.”

And the fact was that every time her name had come up when people talked, he’d always listened.

She made a face, put her clutch in gear, and tapped the stick shift with her hand. “So who’s talking about me?” she said.

This time, he allowed a mischievous smile to pull at the edge of his lips, and he winked. “I’ll tell you tonight at dinner,” he said, then stepped back, closed the door, and patted the roof of her car. He waited while she backed up and drove away before taking in his brother. Harold had gotten into a cruiser and was pulling out, and Marcus took a few steps toward him, all the while taking in Tessa as she drove off.

Marcus gestured with his thumb to her. “Didn’t know you two were friends,” he said. Owen knew Marcus likely wanted to ask a lot more than that.

“I’ve known Tessa a long time,” Owen said. “She was upset. We went for a drink.” he added.

Marcus nodded, but he seemed distracted.

“So you talked to Jackson’s parents?” Owen said. The last thing he wanted to talk about with anyone was Tessa or anything about the personal side of his fucked-up life.

“Yeah,” Marcus said. “I had Lonnie head over, and he broke the news. I need to speak with them later. They have a ton of questions that I don’t have answers for.”

He could see how this was eating up his brother. He carried a lot of weight on his shoulders, being sheriff. If he screwed up in any way, the chances of his re-election would be slim, considering all eyes were on him now.

“You have any idea how he died?”

His brother said nothing for a second. “Too early to say for sure, but the coroner said early signs show asphyxiation. From what, we don’t know. Are drugs involved?” Marcus shrugged. “We’ll have to wait for the tox screen to come back, and then we’ll know more. We’ll track down the kids from school, his friends. The school still doesn’t have security cameras, but someone knows something. We’ll find out. Oh, I put your tools into your van for you. I’ll let you know when you can get in and do the repairs. School’s closed for now, so the kids will have a few days off while we investigate.”

What could he say to that?

“You think someone killed him?” Owen said. “When I showed up, Rita Mae was going on about grad pranks. You know how they go. You and Ryan were thick as thieves in everything that went down.”

Marcus didn’t smile, just glanced away and then winced. “Yeah, well, can’t say for sure. At least I have an idea where to start, considering I was one of those kids.” He patted Owen’s shoulder. “You heading over to Ryan’s tonight?”

He shook his head. “Not tonight. I have plans.”

Marcus took him in, then looked down the road where Tessa had gone and back to him. “Tessa or someone else?”

There it was, his annoyance at anyone asking too many questions about his personal life. “Just dinner, catching up with a friend,” Owen said. “See you Friday. I take it you’re working late.”

He thought there was a hint of a smile on Marcus’s face, then another wince. “Yeah, I’m working late. I’ll stop in at home, check in on Charlotte and Eva, but this is a hell of a thing. Of all the years we’ve lived here and all the crazy things that may have happened in this town, finding a kid dead in the janitor’s closet at the school is something I never would’ve expected. I don’t know, Owen. Whatever turns up, I just have the feeling this isn’t going to have a happy ending for anyone.”

Owen watched as his brother strode away to his cruiser. The emergency vehicles were still there, and there was tape across the door to mark the crime scene. As he walked to his van, he was feeling something he hadn’t felt in a good many years, as if more secrets were brewing, ones that could rock his hometown.

Whatever it was, he hoped it would be resolved quickly. He couldn’t have explained that tightness in his chest, that weight he’d been carrying for so long. There were secrets he didn’t talk about, which seemed to simmer in a place inside him that he’d once thought was safe from anyone.

He took in the school, pulled in a breath, and forced himself to think of Tessa. The diner where he’d once gone was exactly the place he wouldn’t be taking her tonight.

Audio production is now underway for THE HOLIDAY BRIDE, narrated by Jessica Osbourne.  Stay tuned!Click here to see my titles currently available in audiobook!And did you know... if you already own one of my eBooks on Kindle, you can pick up the audiobook at a reduced price with Whispersync?  Whispersync allows you to both read and listen, and you can even switch back and forth between reading the book on Kindle and listening to the book on Audible without losing your place.