What people know about me is that I am a New York Times and USA Today bestselling author and Readers’ Favorite award winner with over sixty titles published in audio, eBook, and paperback, with translations in both German and French. My big family romance series have become a worldwide fan favorite and been at the top of Amazon’s bestseller list countless times.

But what many don’t know is that I am probably one of the most rejected authors out there. No one would publish me. Every literary agent and major publishing house turned me away. Added to that is the fact that I am a single mother of three, one of whom has autism, and that at one time the four of us were homeless. It was humbling and as close to hitting rock bottom as I have come, when for a time we were forced to live in a tent because we couldn’t find a home in our community. There were days I was scared because leaving would have meant giving up all the sacrifices I had made to get my autistic child the help he needed. I felt very much alone because I didn’t know what was around the corner and didn’t have the answers to get us out. At the same time, I learned pretty quickly that no one was going to rescue us. I had to be our rescuer. From then on, I swore I was not going to allow anything to keep me from achieving my dreams.

Many of life’s failures are people who did not realize how close they were to success when they gave up.”
Thomas Edison

I never gave up. I moved us through those hard times, and I found us a place to live. I had to start all over at the bottom, advocating to get my son help, and never once did I give up on my dream of being published even though all the experts in the industry told me it couldn’t be done, even though they said, “We don’t want you.” What I believed and what I was told were two different things, and not giving up on my dream has allowed me to find the strength and vision to truly believe anything is possible. It’s never too late for anyone to start living and pursuing their dreams. I took risks, stayed focused, and worked my butt off to the point that I now have over sixty published works, a career, and a rewarding life for my children and me. Even though I sometimes write about overcoming the darkest hurdles, there is always hope, because if you truly believe as I do, anything is possible.

Remember that guy who gave up? Well neither does anyone else!" 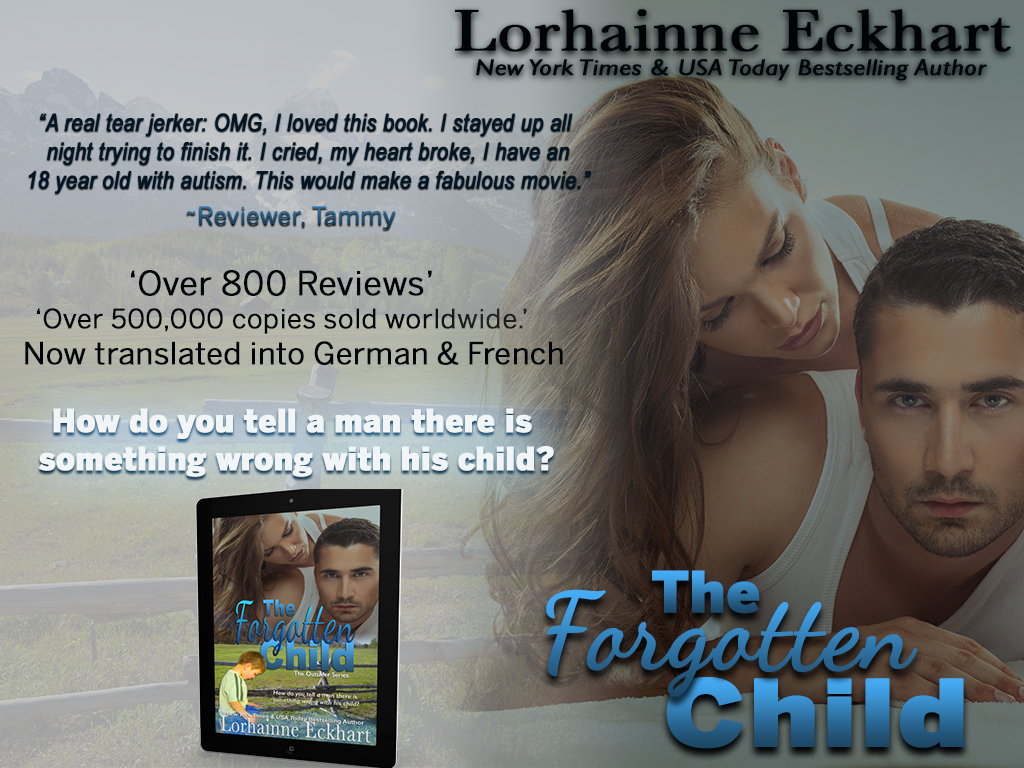 And let me tell you how good it feels. The Forgotten Child hit the Amazon Bestseller list and stayed there for two years running selling more than 500,000 copies worldwide, and is now translated into French & German. I never expected the response from fans, which then sparked the long running Friessen series, and it all began with The Forgotten Child,  the first book of The Outsider Series. 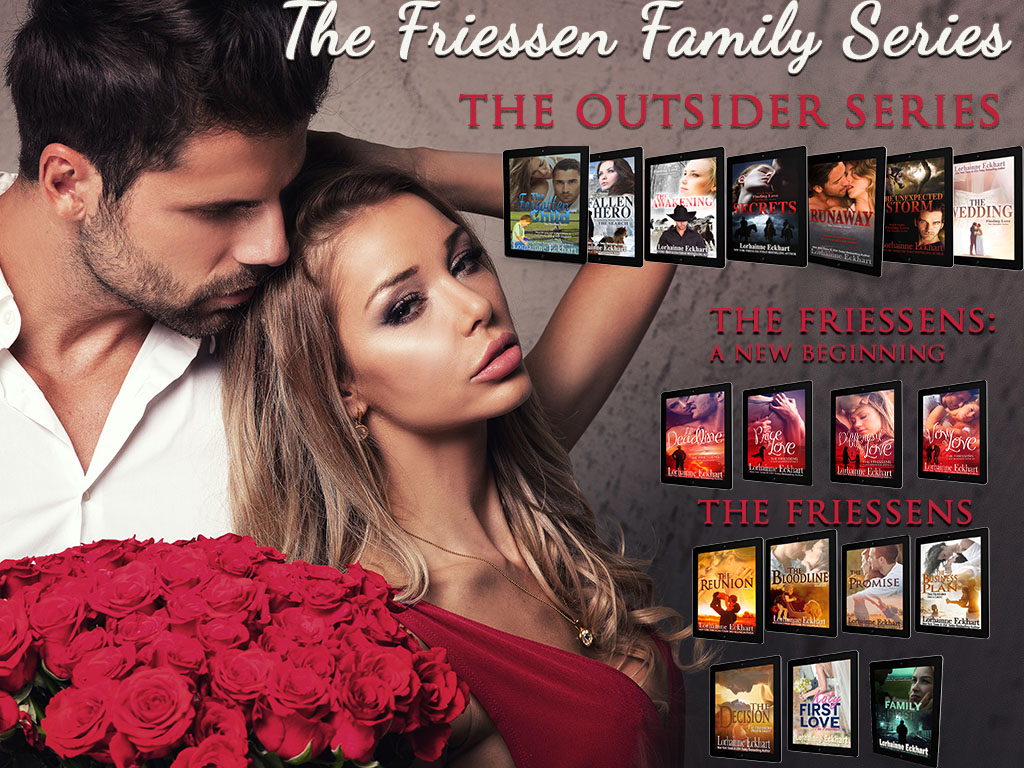 Lorhainne Eckhart Will Touch Your Heart...You'll go from sad tears to happy tears, see reunions between family long apart. Grab this book and a box of tissues and enjoy!"
Rita A., Kindle Customer

Your Free eBook with My Apologies

As many of you are aware, I experienced a glitch with my e-mail marketing service last week and you may have received several generic test messages from me containing broken links and not in English!  I hope you will accept my sincere apologies for this disruption to your inbox and I'd like to make this up to you by offering you a free eBook copy of DON'T STOP ME (The McCabe Brothers, Book 1).

Again, my biggest apologies for any inconvenience this glitch may have caused, and many thanks as always for your continued support.  I hope you enjoy this title!

Check out my newest hit series,
The McCabe Brothers!

“Eckhart has a new series that is definitely worth the read. The queen of the family saga started this series with a spin off of her wildly successful Friessen series.” 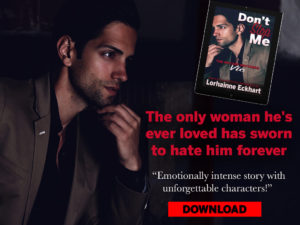 Fifteen years ago, Vic McCabe was headed down a one-way road to destruction with the love of his life. But then the unthinkable happened, a mistake that changed their lives forever.

He stopped a robbery. Now he has to do the right thing.
AMAZON
KOBO
NOOK
GOOGLE PLAY
iBOOKS 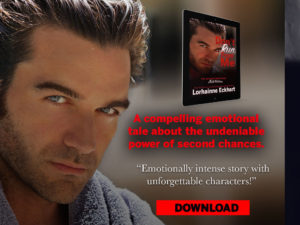 Fresh out of the fighting circuit and to those that didn't know him, Bad Boy Aaron McCabe seemed as if he had it all. Except what everyone doesn't know is the nightmares that haunt him about a tragedy he's never recovered from losing the only woman he ever loved. 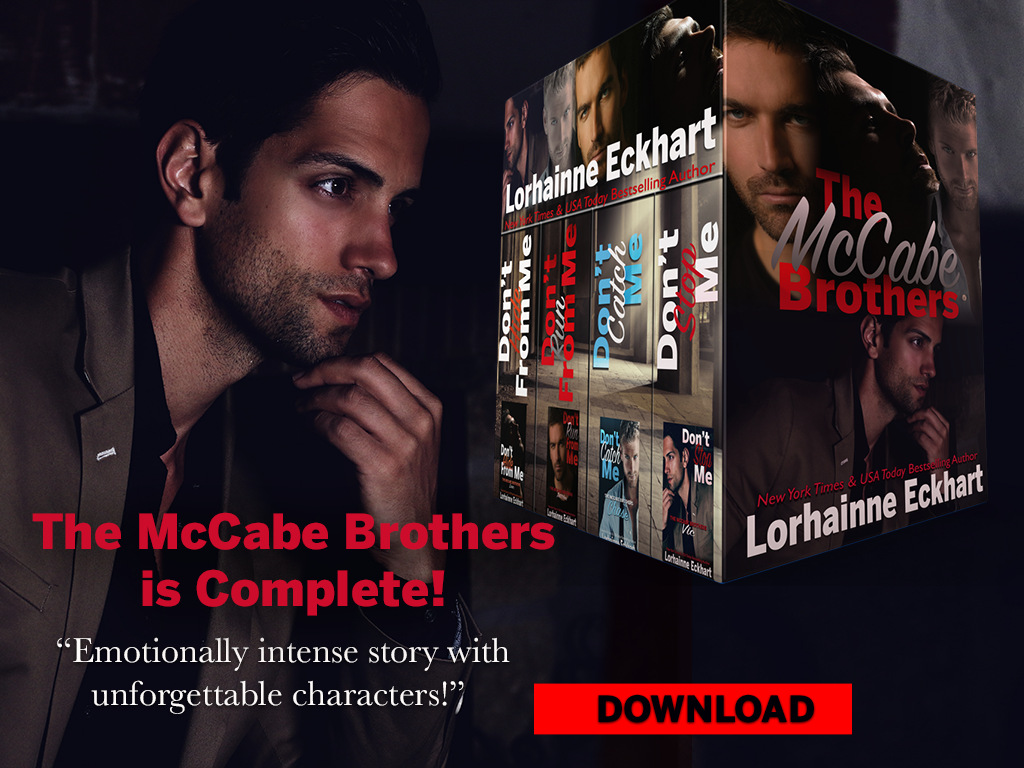 Dark Romance, if you like your heroes with a dark side you will not be disappointed with The McCabe Brothers, a spinoff of the big family romance series The Friessens from a Readers’ Favorite award—winning author and “queen of the family saga” (Aherman) INCLUDES: ​Don't Stop Me, Don't Catch Me, Don't Run From Me, Don't Hide From Me

Luc McCabe is a man on the edge. Not only has he given up on his ideal happily ever after, which includes a man who’ll love him and children of his own. He’s leaving behind his old life that has been only been about endings. What Luc doesn’t realize is sometimes love happens unexpectedly.

Even though Claudia is part of the McCabe family, with four older brothers she barely knows, she has a dark side no one in their right mind would mess with, and she still sees herself as alone. That is until one night, when she witnesses an unspeakable crime that blurs the lines of morality. Her first instinct is to run, but when a mysterious handsome man enters her life, promising to keep her safe, she’s caught up in a web of secrets, not knowing who to trust. When her brothers unite, will they expose the truth or destroy any hope Claudia has of finding love?

September Giveaways
Enter any or all below!

Don't Run From Me

Are you all caught up with the Billy Jo McCabe mysteries?